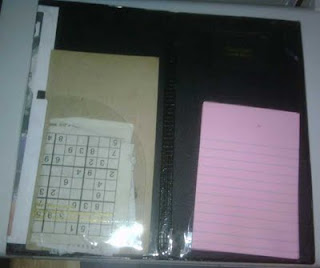 Every server has one; without it, most of us would be lost. Along with a practiced smile and an ability to tolerate utter assholes, it's a server's best friend. Sometimes it's a simple "guest check" pad jammed in a pocket. Other times it's a fancy affair with pockets for notepads and pen holders. Sometimes the type of book is designated by the restaurant.

At my first restaurant, I just carried a pad of guest checks in my apron pocket. The cardstock-like paper was sturdy enough to tolerate the abuse; the sheets were perforated to tear but only barely, so my orders didn't fall off. I'd ring in an order and then staple the ticket to the back so when the customer was ready to pay I could dispose of the whole thing.

When I started working at corporate restaurants, I had to adapt to the use of a black credit card presenter for my book. I tried my familiar notepad-in-the-pocket thing; but the notepads provided (and in more than one case, mandatory) were long enough to protrude out of the pocket, were made of flimsy paper, and were very poorly put together. After my first one fell apart because the rubber cement-like "binding" at the top came off, I gave in to the black book. It was also handy to hold my bank, something I didn't have to do at my first place.

I bailed on the corporate restaurants for about four years, and in fact got out of serving entirely for one glorious year. When I started again, I snagged a black check presenter for my book like everybody else. Some people had stickers on theirs, but they got gross and dirty and left a sticky residue, so I didn't want to bother with it.

Eventually, though, I got annoyed with the fact that my book only had one pocket, and was lacking one on the left side. The managers kept saying they were going to order ones with two pockets, but in the meantime someone told me to just take some tape and paper and make one. Of course, that looked terrible to have table wrapped around the book for no visible reason, so I decided to disguise it by decorating my book.

My first book was covered with pictures of a-ha's Analogue album covers and lyrics. Once crumbs had worked their way into the tape, and water had gotten in and made the ink run, I tossed it out and made a new cover--this one of my favorite LOLCats. Well, all except one, because those managers had a stick up their ass: 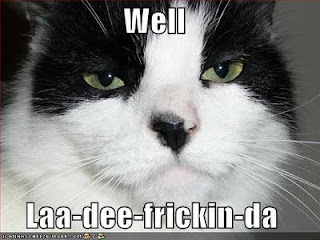 The LOLCat book was great because people would want to read the captions and talk about it. But when I started decorating my book, I actually expected to be told that wasn't "spec" and I couldn't do that. When I transferred to my current store, I still had the LOLCat book, and was surprised they didn't tell me not to use it--nobody there even has stickers except one server with a radio station bumper sticker on hers.

Sadly, my LOLCat book had an unfortunate incident with some Fat Tire and was totally ruined. Also ruined was an adorable "thank you" note from a little girl named Bree (she liked the stuff I recommended for her), which I had taped into the inside of my book.

That was in January, and I just hadn't gotten around to decorating a new book yet. This was partially because I was too cheap to buy an ink cartridge, and partially because I couldn't think of anything to put on it that didn't seem immature. My first instinct was to plaster it with pictures of Morten Harket, but I'm a little old for that sort of adolescent behavior at this point. 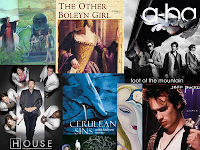 Using a plain, unmarked book was driving me crazy. Because it looked and felt like every other book, sometimes I'd leave it on a counter and then have to flip through a dozen books to find it again. It would get mixed up with other server's books. This is especially problematic when I have cash in there. So tonight I made up a 10X7.5 collage, printed it out, and "laminated" it on to my book with packing tape. I'll be able to identify my book at a glance, as will my coworkers; and it might even assist me in striking up conversation with customers if they recognize anything.

It's also one of the few things that can appear unique about me at work--we're required to have our hair back, not permitted to wear certain kinds of jewelry, have to wear head-to-toe black, have to wear a nametag and one piece of promotional crap--it short, the cookie-cutter look. They're always telling us to make personal connections, get to know our guests, have 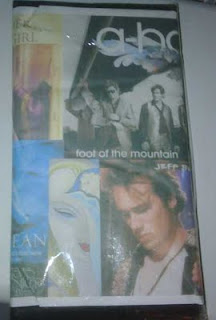 personality, etc., but the fatal flow with that plan is this: when we all look identical and interchangeable, customers don't perceive us as individuals. I'm forever being mixed up with servers who look nothing like me except for being fat, because most of the time customers don't retain anything but a vague impression of their server.

So in addition to making my book identifyable to myself, hopefully it will jog some customers into realizing that yes, I am an actual person with actual interests and life outside of the restaurant. A lot will remain oblivious, of course; but some are bound to say "Hey, I love House too!" or ask me if I even know what album that woman's face is from (yes, yes I do).

What's your serving book like? Is it strictly functional, or something unique to you? Is it bare minimum functionality, or does it have bells and whistles?
Posted by purplegirl at 1:23 AM

We have wonderful server books (or, at lest we used to). Yep, they were black too, but they had two pockets and the front and back are padded. They've since refrained from buying them, so new servers end up with HALF a book, which is utterly ridiculous and its a royal PITA. Everything gets crinkled or crumpled. I hate that!

We use black books with pockets on each side. Pretty plain. At one place I worked we had a book with the two standard pockets, but an added one on the left (with the clear plastic) and then something like a small accordian pocket on the left as well. Very functional.

There's a big box of them underneath the heated area where we put carryout orders waiting to be picked up.

i use a credit card presenter. but i have one t home that I use when I go on vacation because it is the perfect size for airline tickets, boarding passes, and a passport. Try it.

Hey there. I am now at www.thebitchywaiter.blogspot.com and all the links anyone did have for me have vanished. Can you re-link me? Thanks!

If I was still working the floor, you know that mine would be a collage of LOL cats and the Brucester !

I was wondering where your blog went!

Ours have two pockets on each side, a pen holder, and a place to slide in the paper we're supposed to keep track of things on. I'll take a picture sometime.

Sorry, I know this is old, but just wanted to say- LK Hamilton rocks. ;)