Oh god, what have I done. 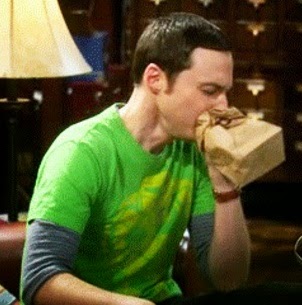 You guys. Seriously. Somebody get me a paper bag because I'm totally hyperventilating right now.

I just quit my full-time job to go back to serving.

Okay, I'm just kidding. About the hyperventilating part, that is.

I have indeed traded in my desk with the mountain view for a greasy kitchen floor with a view of the grill cook's butt crack. I've dumped a regular 8 to 5 gig with a steady hourly rate in favor of an ever-changing, uncertain schedule with impossible to predict financial returns. I've swapped clothing freedom and soft, painless feet for a rigid uniform and aching soles. I've thrown out scheduled breaks and lunches and dealing with a 100% digital product for hours of unbroken work and greasy ranch all over my fingers.

Or, to look at it another way ..... I've traded in sitting in one spot, growing ever fatter, developing carpal tunnel and thoracic outlet syndrome, and hating the walls around me, for constant movement and built-in exercise (okay, and probably still hating the walls around me). I've dumped listening to the same damn people sitting next to me talk every damn day, and having to watch what I say to them, for a constantly rotating cast of characters who will just laugh when I say something perverse. I've thrown out dealing with corporate attendance policies and rigid, inflexible hours for sleeping in, staying up late, and having the same schedule as most of my friends.

I never thought I'd do this. I'm even back at the same restaurant that 99% of these blog posts are bitching about. But I couldn't take the desk job anymore. I felt like my brain was rotting from the repetition of my job - and since it involved staring at a screen and reading all day, I found that when I got home I didn't want to do a lot of the things I enjoy - reading, writing, playing games - or like knitting or baking, I couldn't because my eyes hurt, my wrists hurt, my back hurt, etc. I hurt just as much from sitting all day as I ever did from serving - just in different places.

Then there was the time issue. Eight hours a day, five days a week - it sounds simple and normal, right? But I found it chokingly, miserably restrictive. Going to the doctor or getting to the bank to deposit money was a huge ordeal. Time off was sparse - I had the hours, but it was extremely difficult to get approval to use them. The inflexibility drove me crazy. And, I'm sorry, but waking up early fucking blows. People kept insisting my biorhythms would adjust, and yeah, it got a little easier after a year or so. But my body clock never truly re-set. I might fall asleep at ten and wake up at 6:30 a little before my alarm clock went off, but I was never rested, always groggy, grumpy, and ready to fall asleep again - including falling asleep at my desk more than once.

And, of course .... there's the money. My company used the same payroll service as the restaurant, so when I logged in to view my tax info, I could see my restaurant W2s for 2010 and 2011. Now, in 2010 I was gone for two months or more, flitting off to New York and California and friggin' England. In 2011, I was out for most of two months because CL was trying to get rid of me and was cutting my hours etc. Overall, I was working 30 hours or less a week. Guess what? At my desk job, averaging six hours of overtime a week, I only made a thousand dollars more in 2013 than I did in 2010 and 2012 at the restaurant - oh, and of course, that's only what I claimed. Hmmm ... 30 hours or less a week for the same amount of money as 46 or more? Let me think.

All of those things were building and frustrating me over a long period of months. Meanwhile, Mistress J was keeping me up-to-date on goings on at the restaurant. She had been furious and about to leave, because CL's replacement was a douchebag who promoted people with less experience while treating her like shit. And then the company told him to get the fuck out, and replaced him with someone awesome. I've never seen MJ so happy with her job and her boss. So for several months I picked her brain - what was business like? Were they still as busy? Was the new manager still cool? Did she flip out over little things? What's sidework like now? and on and on and on until she must have been fucking sick of me. I also re-read a lot of my own blog entries and other serving blogs to remind myself of what it's like.

But finally, after months of pondering (and not finding any other jobs that didn't pay even less for the same pains), some things happened that just pissed me the fuck off. I was given a final attendance warning because I was gone because my father was having emergency surgery (two surgeries actually, and my direct supervisors were as cool as could be about it, but the higher-ups made them "follow procedure.") At the same time, a lot of changes were made to our procedures that made everything more time-consuming and less efficient (but more ass-covering for the management). I also found out that new, temporary employees were making more than established people like me even after my fucking joke of a raise. Then, supervisors and people who had been with the company for 10+ years starting leaving at a rate that was just plain suspicious considering the amount of work the company has been outsourcing to India.

So ... I took the leap. I put in my application at the restaurant, Mistress J talked to the new boss, and she hired me back without even meeting me face-to-face, just based on what MJ told her! I put my notice in at the desk job; my last day was today*. My first day of "training" is tomorrow - luckily they're not going to make me go through the entire process if I can prove I don't need it.

I'm slightly apprehensive, but mostly I'm just freaking excited. I'll be working with friends - Mistress J obviously, plus Work Wife and Accent Girl are still there (so are Barbie and the Bug but I'm much less thrilled about that). I'll be able to give up shifts, pick up shifts, and generally have the flexibility I need in my life at this point. I'll get some exercise which is great because damn - I've always been fat, but I've never been THIS fat. I'll eat better because I'm much more likely to have healthy meals when I can just order them since I freaking hate to cook. I'll get to stay up late/sleep in. And cash! Glorious cash! In my pocket every day!
Hot damn!

And, I'll get my vacation time paid out from the desk job and that will be my savings cushion, plus I may just empty out my 401k for savings too - I wouldn't have gone back to uncertain income without something in the bank. I'll also still be working my pizza gig because I just plain like it!

I'm sure there will be moments I'll regret this. I'm sort of terrified I've made a huge mistake. My dad is going to have a conniption when I tell him. But for now, it feels right.

Oh - and just as I thought, CL had marked me as "not rehireable" for no reason (literally, she put no reason in my file). What a bitch.

*Okay, today as of the day I'm writing - I'm not going to post it until I've got a few entries written up to keep the momentum going.

Good luck in your new old job! Lot to be said about the flexibility serving can give you.

God bless you. I've always thought about switching to an office job, but you have put into words every fear I have.
Best of luck to you, hope your dad is doing well, and I look forward to your restaurant posts again!

Thanks Corina! Blonde, trust me - office jobs suck, lol. At least for me. The lack of flexibility was killing me!