No, I do not agree, and fuck you very much.

I can't even imagine the hate comments I'm going to get over this post, because somebody is bound to see it as me criticizing America or disrespecting troops or something else that I am clearly not doing. Whatever. I feel better anyway!

One of my family members posted this on Facebook: 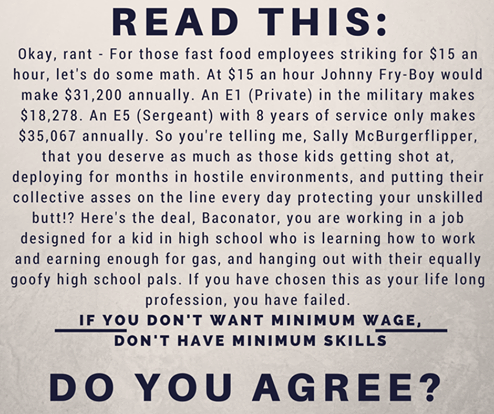 I'll be honest, it hurt my feelings. I'm still pretty upset at the relative who posted it, and the one who "liked" it. I thought about posting a long rant on Facebook in response, but let's be honest - nobody would read it. And maybe nobody will read it here, but I'm going to go ahead anyway.

I really hate this graphic you've made.  It's sarcastic, it's rude, it's denigrating, it's belittling. It's completely hateful, and I'd truly like to know why.

What did anyone in a "minimum skills" job ever do to you? There's such vitriol here, it's so scathing and nasty that it feels personal, and I don't understand. Did an entire McDonald's staff line up to give you wedgies? Did all the hot waiters reject you? Did the cute girl at The Gap (Gap is still a thing, right?) laugh at your hair? Seriously, what did an entire huge group of people do to deserve such scorn?

Why do you assume that I have only "minimum skills" because of my job? You don't know me. You don't know what I'm good at or bad at - you only know how I chose to make my money. I'm a hell of a writer when I put my mind to it, but I don't want to make a career out of it. I'm mere credits away from a history degree, but again, it's a passion, not something I want to make a career. Mistress J used to be a phlebotomist. Lap Dog cooked for a world-famous chef. One of our best servers was a former sheriff's deputy. We all have talents - you not seeing them does not negate them.

And even if someone does have only basic skills - why should that person suffer and be poor? Someone has to bring you iced tea, flip your burgers, give you change at the gas station, restock shelves, take your bank deposits, and do a myriad of other things that keep the world running. Why do you feel those people aren't entitled to a comfortable life? So "Sally McBurgerFlipper" didn't finish high school or "Baconator" didn't have a talent for sports or "Slightly Cranky Waitress" never found a career she could sink her teeth in to. Should we starve to death? Then who will make your venti no foam skim sugar free vegan iced latte?

And the crux of this post .... Why use the military to drive home these points? My grandfather struggled to provide for his family of seven on a military salary - did you see something like that too, and did it embitter you toward the military? I could understand that. However ... nowhere in this graphic did you suggest that military members be paid more. Nowhere did you say it's a travesty that they risk their lives and sacrifice for such low pay. Nowhere did you incite people to push for military raises. Instead, you used the idea of military members' sacrifices as a cheap ploy to vent your views about us "lesser" humans.

And you know what? In doing so, you didn't even do your homework. You see, military pay rates are available online for the world to see. I checked, because once I suppressed my personal feelings about your statements, I was horrified at the idea that I, a mere waitress as a low-end restaurant, might be making more than someone who serves the in the U.S. Military. That really would be a travesty.

And initially, I thought you were right. If you look at the 2014 base pay rates, an Army E1 did indeed make $18k a year. An E5 with 8 years did make $35k. I couldn't believe what I was reading. And then I looked at it again and remembered something that you either didn't know or chose to ignore, so let me educate you: military base pay differs from a civilian's gross pay. All our living expenses come out of our gross pay - but military members get BAH and BAS. Those are allowances for housing and food. Said allowances are tax free. So, let's run some numbers.

Now let's look at an enlisted E1's pay - and we'll assume that in this hypothetical world, economics aren't insanely complicated and so a minimum wage increase would have no impact on anybody else's wages.

(For the sake of completeness: using the same references, the E5 mentioned in the meme would have a take home pay of $44,861 yearly or $3738 a month.)

The point of me running all these numbers is NOT that I think military members are adequately paid for their time and sacrifice.

The point is that a) I'm a big nerd and I enjoy this sort of thing, so it was actually kind of fun for me and b) your entire scathing, nasty meme is shored up by incomplete, and thus misleading, information.

Your attempt to use military pay rates to justify keeping other workers in dire economic straights is pathetic and insulting, because you're using the military and American pride as an emotional string - when your language makes it clear that you don't think military should be paid more. You just that "minimum skilled" people should be paid less. And guess what? They are. Drastically so. Even in hypothetical $15-an-hour-minimum-wage land, they would be paid less! So ... that pretty much takes the wind out of the sails of your argument, doesn't it?

Maybe, instead of spreading "info"graphics on the Internet to work out your rage and disgust with those of us are clearly so far below you .... you should think about what it is in you that makes you look down on the lower class, the working class, who are just trying to survive.
Maybe you should examine your attitude, and figure out why you think someone else deserves to live in constant economic stress and fear just because they're doing a job you think you're too good for.
Maybe you should analyze your life and your own achievements, before branding other people as failures because of how they pay their bills.

Posted by purplegirl at 3:22 AM

Email ThisBlogThis!Share to TwitterShare to FacebookShare to Pinterest
Labels: entitlement junkies, for the general public, will you please just shut up already

girl, you did your math.
by no means do I want to belittle military. but by no means we should be belittled for giving you the burger you need on the fly. for making a quick buck while we scramble around with what we want to do, or for actually enjoying waiting tables. you aren't wrong, my love.

Thank you. I was practically frothing at the mouth at first, the math helped me chillax lol.

Thank you for posting this PG. As a former waitress( said with a ton of pride) and a veteran's wife amongst other things, I can fully support your feelings here. The posters original article was crass, rude, ill thought and just flat ass mean.

Thank you for doing the math, it really does add up (pun intended). There is a slight typo when you mention BAS though. On the site you linked to, BAS is indeed 323.87/month for enlisted members, so shouldn't that be 3886.44/year? Or is BAS only provided during deployment, or is there some limit on that? Either way, thanks for thinking through the details!

Thank AP. I'm glad someone with a military connection thinks this is bullshit too!

It's not supposed to be a career. It's a stepping stone with incentive to do better. $15 an hour for unskilled labor is ridiculous comrade.

I can't say it any better than I already did - And even if someone does have only basic skills - why should that person suffer and be poor? Someone has to bring you iced tea, flip your burgers, give you change at the gas station, restock shelves, take your bank deposits, and do a myriad of other things that keep the world running. Why do you feel those people aren't entitled to a comfortable life?

I'm the anon that had the question about BAS. Thank you for responding, I must've just not been paying enough attention.

As to the issue that some other anon said about $15 being too much for unskilled labor, well, one could argue that there is no such thing as 'unskilled labor'. Multitasking, prioritizing, making good suggestions, wine pairings, etc. are all skills.

I wrote and deleted a section here about military pay, but to avoid political entanglement, I'll just say we should pay our military servicemen and servicewomen more money as well.

Love it, love it, love it! I haven't always agreed with stuff you've posted in the past but I love what you write and chances are I'll copy and paste (with credit given) this next time one of my hillbilly family members posts something like this on Facebook.

People in the military should be paid more, but as you said - those in positions like yours should suffer and be poor just because someone else deems them unworthy.

Obviously every US army soldier has more than 'minimal skills. I guess the poster must have forgotten what happened in Abu Ghraib for example, perfect example of highly skilled US soldiers...

If you properly read my post, you would see I said "THE ARMY EQUIVALENT of minimal skills," thus already addressing your point.

That is an excellent comment. I'm a psychology lecturer and one of the lectures I deliver is on morality. I have been noticing, with increasing concern, the tendency to denounce whole groups of people as scum (posh white men and white working class men are common targets). This condemnation is not based on something somebody has done, merely based on the group they belong to. Our sense of justice should be outraged by this, because it is evil, it is evil to condemn someone without recognising any part of their uniqueness. It is a faceless, nameless and indiscriminatory condemnation that refuses to see the individual persons in themselves and judge them on their person and particular being and behavior. As such, the condemnation is merely emotional and refutes rationality; it is anti-meaning and anti-human.

Anyway, I just wanted to say thanks. And I will probably rip your comment off and use it, with the appropriate recognition of the source, of course!

I've an art degree, meaning I am qualified to make films, sculptures, paintings, work with glass, design graphics (logo's, posters, adverts etc), curate a gallery, run a gallery. I'm trained in customer service, telesales, accounting, digital marketing, food service and makeup artistry....and I can't even get a job as a cleaning lady.... so no... one cannot judge someone's skills by the job they have, or their lack of one....

You are such a prick! Get over yourself. Hate customers but want a tip. Hate requests for allergies but want a tip. Wrong job sugar find a new one if you are capable. You make it sound like you are the gear that makes the world tick. Bitter sad twisted failure who hates everyone for it!

Very well said! ♡ I truly hate when someone uses a simplistic meme with no real info behind it to make a point. That is some ignorant bs. Your analysis was fantastic.