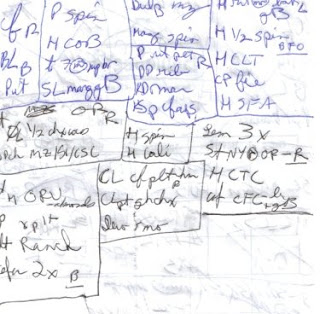 I've been noticing lately that a lot of my coworkers write down every single word of the order. They'll write out "7 ounce sirloin medium well mashed potato green beans" etc. At first I thought it was just brand-new servers, but some who've been doing it for at least a year do it as well.

Between that and somebody gawking at all the orders I had crammed on to a tiny page, it made me start thinking about my own shorthand. Some of it is pretty obvious--CFC is pretty standard for chicken fried chicken. "T" for tea is pretty simple. But I think some of it would confuse almost anybody. "H" is water. Why H for H20 instead of W for water? I have no idea. I've just always done it that way. "Ranch" is our buffalo chicken sandwich, whereas R is a salad with ranch, first out. "OR" with a R written in subscript is onion rings with a side of ranch. "2x" is one of the shrimp dishes, and "3x" is a three-cheese dish. CL is cherry limade, unless it has a subscript of "pt", "B", or "m", in which case it's a Coors Light.

And then some of it is just .... quirky. Green beans are always "gB" in cursive. Again, not really sure why; I think it has something to do with writing an ess-tzet (ß) when I was taking German, as that looks like a capital B. "rib" is short ribs, but "Rib" is baby backs. If something is circled it's a temperature for a steak; if it's underlined it's a pre-meal item. "spin" is either a spinach salad or a spinach dip, but I don't differentiate (unless I put a 1/2 in front for the smaller portion) for some reason. Some things (like "cf" for chicken fingers) are always in cursive, where as others ("BL" for boneless) are always in print.

What are your abbreviations or notepad quirks?
Posted by purplegirl at 2:15 AM

We got these nice little pads with lines in them which makes it easy for me. I work in a steakhouse so you know filet 8 mr BP- works that is it really.

I do the thing with underlining apps and circling steak temps, with the normal things like mr is medium rare, etc. C is coffee, a double order of something is just 2x at the end. I guess they're just simple things but I'll keep an eye open for them at work tomorrow and let you know :P

Since I work with pizza, most of my abbreviations are simple:
Med=medium
Pep=pepperoni, GP=green pepper, Bl O=black olives, GB=ground beef (if in relation to pizza) OR garlic butter (if in relation to breadsticks), etc.
All of my writing on my sheet is always lowercase, which I'd never thought about till now.

I had to think about this for a bit. Chx FSal and B FSal are our chicken and beef fajita salads. I use the normal abbreviations for burgers, although plain hamburgers just get written as a temp and side. The only way I differentiate between our steak dinner and steak sandwich is the dinner comes with a soup (cup) or salad (sal with the dressing choice).
Off topic, I hate it when people try to look at what I'm writing when I take their order. Just a pet peeve.

I think it's hilarious when people try to see what I'm writing--for one thing, my handwriting is generally illegible to everyone else (the example I posted I actually chose specifically because it was readable!). For another, like they're going to know whether "H cfr -pic -ff +mp(l)" is what they ordered or not!

chx= chicken
w/w= water
w/w/l= water with lemon
dr= dr pepper
spag w/M or spag w/S= spaghetti with meatballs or sauce
Xtra= extra sauce
There are a lot of different ones that I use. I think every server has their own fun ways of writing stuff down. There's a soup we have, if abbrev. looks like fag. lmfao.

Ha! We offer a party platter of chicken fingers, and it's actually in the computer as "fing plttr". So we all call it the effing platter.

This just prompted me to take a look at my current book:
SL-strawberry lem
w-water
r,mr,m,mw,wd=steak temps
crois=bread order
circled items are appetizers or salads(since we make our own salads, helps me not forget)
every side dish has abbreviation (GB, MPG/MPnG,Cass,FF, CS,car=green beans, potatoes, and so on)
Only things fully written out are specialty drinks from the bar, or rarely ordered/unpopular items...go figure :-)

Yeah, I've got some things too that don't have their own abbreviations--things that I get an order for maybe once a month.

A few more that I use: m-rare = medium rare; med = medium; m-well = medium well; BROC = broccoli; GB = green beans; ASP = asparagus; blue = blue cheese; I draw a box around table numbers if I write them; I connect multiple items for one person with what looks like a big "<"; and I also write "OTS" for on the side.

Most of mine are remnants of abbr. From first server jobs...and .. Many i make up on the fly...