For the last week, my tables have been surprisingly low-maintenance. Nobody has really been annoying or rude, no crazy requests, basically it's been smooth sailing.

So naturally, I paid for that today. It started with a speeding ticket on my way to work. I was doing my best to regain my equilibrium but it seemed like the restaurant gods wanted to throw every annoying thing possible at me.

I had the "I'll just have HOT water with lemon" bitches who had their own tea bags.

I had the "my friend will be here in just a minute" people taking up three of my tables for two hours.

I had every single person at my first five tables just flat out interrupt me in the middle of a sentence - I guess they just couldn't stand those annoying little sentences like "how do you want you steak cooked."

I had screaming children who mashed their cereal in to the carpet and squished applesauce on the walls.

I had a woman who let the other two order and then just started a conversation, completely ignoring me as I stood there, having given me no indication what she wanted. Her friends were as confused as I was.

I had "don't you have any VEGAN options?" (to which I wanted to reply "Bitch, you're at SHENANIGANS.") followed by a house salad with eight mods.
(You thought for a second that I was going to give me the real name of where I work, didn't you?)

I had a woman, when I offered her raspberry tea, respond with "No, I don't like raspberry tea." She then perused her menu until I finally said "then what WOULD you like to drink?" She ordered water, of course. Then her husband informed me he can't drink our water so he brought his own "and that's just how it is." He later ordered coffee. Okay.

I had a dumbass who waited for her friend for twenty minutes and during that time she studied our gluten free menu. After her friend showed up, she proudly informed me that "I'm dairy free too, do you have a menu for that?" It took her another twenty minutes to figure out what she could eat. Hmm, if only there had been a time during which she could have looked at that menu too ....

I had two tables who laughed at me when I offered beverages, laughed heartily as if it was the funniest fucking thing they'd ever heard, and then ordered "a happy hour water! Hahaha!"

I had a couple of women who special modified the fuck out of their order and followed it up with "we need separate tickets and don't you forget our senior discounts!" and a glare.

I had 90% of my tables want separate tickets.

I had three tables order water and split a salad. With special modifications. And separate checks.

I had a woman get up and walk a few steps across the restaurant and yell, while waving her arms, "WAITRESS! I said a minute! It's been a LOT longer! Did you forget us or something?" I calmly told her I was helping other guests and she huffed, "well! It took quite a while!" Her husband, who had not even cracked his menu when she first shooed me away from the table, seemed mortified.

I had the idiots who made eye contact while I said "I'll be your cashier" and immediately said "okay, do we pay up front?" and then after I repeated no, no you don't, they went and stood in the lobby looking like lost puppies.

I had the people who tried to trick me in to forgetting to suggest a certain thing - because every table has a card saying they get free dessert if I don't offer it - and then fucking pout like children when it didn't work.

And, as if that weren't enough little annoying shit, I had a table of fucking bitches from hell. They were pissed off that they couldn't order happy hour drinks fifteen minutes before happy hour, so they said they'd wait. I brought them water and they asked me "what are spirits?" and "what's a house margarita?" If you don't know the answers to those questions, you shouldn't be drinking in public.
I returned to their table after the clock struck Cheap Bitch O'Clock, I mean happy hour. One of them was sitting at the empty bar looking like she was sucking on a lemon, while the other two stared at her. She came over and informed me "there's no bartender and we have QUESTIONS." I politely examined the bartender was doing something in back and I could answer their questions - which were just as fucking stupid as before - and they finally ordered two Long Islands and a margarita. No food.
A while later they asked for three tequila shots and one wanted another beer. A while after that, while I was delivering food to another table, I saw that once again one was at the bar. "We asked her for a drink and now she's nowhere to be found!"
Well, that was because Bug was in the back looking for more nasty Michelob Ultra. We were out so of course the woman was pissed but settled for a Coors Light with Bloody Mary mix.  They also ordered a basket of fries.
A bit later, one asked for her ticket. I brought the tab for all of them, split up, just in case. After rolling her card around in her hands for ten minutes, she finally gave it to me. Meanwhile the Coors Light woman kept staring at the bill and frowning. I'm sure she was wondering why she was charged fifty cents for her Bloody Mary mix but she didn't ask.
The one who paid left - and left a whole dollar - and then another woman replaced her. She asked for water and when I brought it they all ignored me like I was a slug. I asked if they were ready for my to take their checks because both had credit cards out and they snarled no.
Fifteen minutes later, my shift had been over for an hour, so I asked someone to take over. She agreed so I approached the table and smilingly asked if they wanted anything else right now. They said now, so I politely said Angie would take care of them as I had to leave.
The new chick huffed and said "Fine! But can we get some of this off the table because I'm feeling claustrophobic!" I just said of course and picked up a beer glass and a water glass while they all scraped up and angrily threw their silverware in to the not-empty fry basket. They then went back to talking as if I weren't there.

Imagine my surprise when they flagged down the manager a bitched to her for ten minutes about how they were very angry and they had a very bad experience because they claimed I was rude, didn't clear their plates (WHAT FUCKING PLATES YOU FUCKING TWATS), and sighed and rolled my eyes when they asked me to do so. Yeah. Okay. Sadly, said manager (a fill-in) bought in to their crap and gave them half their drinks free.

Now most of this list is small things. But it kept my irritation level slightly elevated all day. And then all the special requests and stuff took up so much time that I constantly felt like I was behind and like I could do no right. Then there were the lying bitches. So when I counted my money and it was a measly fifty bucks for the day, I nearly cried out of sheer frustration. Here's hoping tomorrow is better. 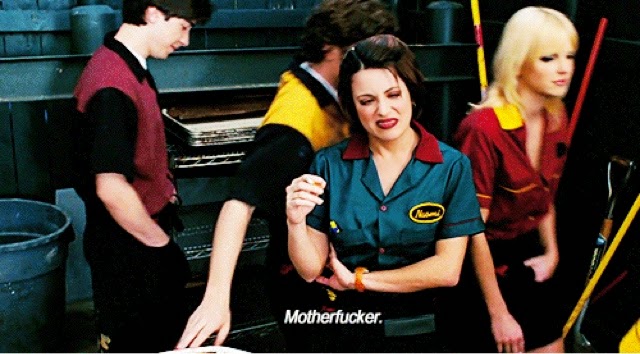 Posted by purplegirl at 7:36 PM

Email ThisBlogThis!Share to TwitterShare to FacebookShare to Pinterest
Labels: you suck and that's sad